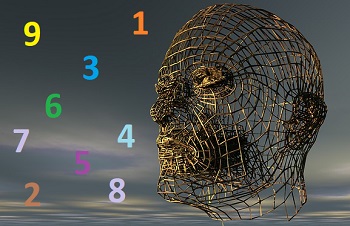 The Pythagoras matrix (also known as psycho matrix) numerological system is an innovation based on old teachings and belief systems. This system borrows its aspects from ancient Egyptian priests, Chinese Sages, as well as the Pythagoreans.

It is the ancient Egyptians who developed a system of numbers to study the union between nature and people. This classical system of numbers was developed to form a correspondence of certain human characteristics with numbers. This was done to predict what a human child could grow into and what would be the specialities of such an individual.

This established system proved to be quite beneficial, especially in those times of wars and diseases. It basically improved the survival of humans.

Taking the harmony of squares, Pythagoras modified the Egyptian system of numbers and added mathematical innovation to it. The square is a well-known figure with symmetrical axes.

Thus, the numerological system greatly expanded. Taking into account the Orphic Doctrine of transmigration of souls, the Pythagorean system reflects it as well. The concept of reincarnation encouraged people to live their lives as best as possible. Their next reincarnation would be dependent on how they lived their previous lives.

The tragedy of fire, which claimed the lives of Pythagoras and his many students, almost burned all his knowledge. It was his pupil, Philolaus, who survived to pass on the knowledge of Pythagorean science of vibrations.

In China, this knowledge met a similar fate. The Cultural Revolution that occurred made the numerology of U-Shin a disgrace to modern society. All the scriptures and manuscripts containing that information about the modern numerology were burned or destroyed. Some were recovered later. However, most of the knowledge was inevitably lost.

Differential mathematics that eventually brought the success these studies needed.

Mathematics in its true nature is to bring order to the mind. The new numerological system has proved its efficiency from time to time. It can reveal fifty personality parameters based on someone’s birth date and chart.

This numerological system also reaches accuracy of about eighty percent. Whether it is the relationships or lifestyles of people or perhaps marriage success, numerology always has helpful answers.

Usage of Psycho Matrix System successfully by many People

Psycho-Matrix Square and its Information about a Person