What is Feng Shui?

Winds come from the sky, water is pressing itself to the ground, winds and water (in Chinese "Feng Shui") are constantly accompanying people, their places of residence and location. Happiness and misery of people may depend on the strength, direction and speed of the wind speed, as well as on the altitude, speed, length, width, depth, of the water flow. 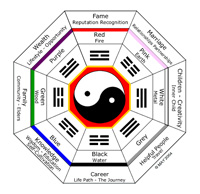 e Chinese geomancy, wind is corresponding to the heavenly things, and water - to the earth life. The importance of the wind (air) and water for the human life is well known. We also know that they are very much needed on one hand, on the other - they can bring misery by their destructive effects. Winds and water are natural phenomena, and people should strive to get closer to the nature, to follow it's rules. Here exactly the "Feng Shui" is helping people, providing health and longevity, life satisfaction, family harmony, improving mental capacity, raising the material standard of living, transforming negative situations into the positive ones. Methods of geomancy can not yet be replaced by any methods of modern science and technology, however, if one will master this esoteric science of the past and the future, then he can figure out how to build his relations with nature and how to avoid some undesirable natural disasters.

How the masters of "Feng Shui" are working?

The first thing you should look at, is the orientation of the cardinal. For example, in most of the European countries only temples and churches were placed according to the cardinal directions, the settlements were built along the rivers, repeating it's curves, as well as the power lines of the earth biofields are repeating the bends of the river. Similarly - the second row of houses. The interaction of the dominant fields of the church, that is standing above the village, and the curving streets of the village is creating a geomancy of this village and of the city, that is developing later. In China, most of the old towns are square in shape, the streets are oriented to the cardinal directions, at houses too.

After watching the cardinal directions, the "Feng Shui" master is paying attention to the elements (wood, fire, earth, metal, water).

In China this exactly five elements are representing the rhythm of successive energies, just like the changing of seasons. Eight trigrams, borrowed from the Book of Changes, are also taken in the account. Trigrams are directly related to the cardinal directions, but they also characterize many other things. Then the "Feng Shui" master have to look at the "Ten heavenly stems" and "Twelve earthly branches". And finally, he goes to the subjects, dividing them according to the forms (round, square, etc.), and then the material (wooden or metal bed, etc.).

In order to perfectly capture the art of "Feng Shui", to become a Master, only the knowledge of complicated laws of "Feng Shui" of course is not enough. Just like in many other areas of esoterica, here the person will need to have especially relevant abilities, including an exceptional intuition and a perfect knowledge of the traditions and of the original sources. Therefore, the purpose of this section is reduced to a small task - only to acquaint everyone with the most basic rules of a famous "Feng Shui" and help to define useful and harmful things at the first sight.