Feng Shui of your bathroom

A few tips how to do style your bathroom according to the Feng Shui. This is the second room (beside for kitchen), where the dominant element is water, so the bathroom is also related to the family finances. Once you have put in order the kitchen and found there a favorable flow of energy, it's time to do the same thing in the bathroom. 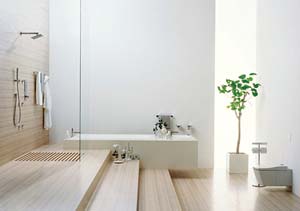 How to create a favorable atmosphere

The bathroom does not have to be very large, but darkness and a lack of space in a similar way will affect your finances. To create a sense of space in the bathroom, you will need mirrors and a lot of light.

Bathroom needs such a symbol of wealth and prosperity, as a circle, so if it is possible, you may install an oval or circular bathtub. Mirrors, shelves and other items must also be circular in shape.

Water is associated with wealth, as well as with the flow of "Qi" energy, and - as long as we always let down the toilet water, which is carried away - then in terms of Feng Shui, this means that the toilets require our special attention. No matter in which part of the house is placed the toilet, some properties of this sector, if there are not performed the necessary manipulations, can be carried away too. Therefore, the best position for the toilet - that side of the house, which is the least favorable for the head of the family, and also such a place, where there is an excess of "Qi" energy, and therefore a decrease will finally bring only a benefit. If there is no such a sector in the house, then you must restore the energy balance using a crystal or a large stone, or a constant flow of the positive energy will lead at the south to a bad reputation, in the north - to the lack of professional development, in the east - to a bad health, in the west - to a lack of fun and romance, in the north-east - a lack of commitment, on the north-west - a lack of responsibility, in the south-east - to the money problems, and on the south-west - to the fragile marriage.

Toilets greatly increase the influence of the "Yin" energy in the environment, therefore, to restore the balance, it may be necessary to confront them with the symbols of the "Yang" energy.

In the toilet, regardless of it's location, you need a good ventilation, because it provides a favorable movement of the "Qi" energy, it is reasonable to have there a small window or a vent.