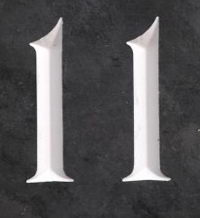 Biblical Numerology is a concept to do with numbers and number stressed upon in this article number 11. Most of the world’s great religions believe that numbers are equipped with hidden meanings which contains the secrets of the mighty universe, the same is described comprehensively in the holy book – THE BIBLE, which in turn is known as BIBLICAL NUMEROLOGY. Each number holds its own importance and significance and is associated with certain gods, goddesses, flowers, stones etc.

What is biblical numerology? The query is very important to answer before you read into the article further. The interesting thing is that each and every word has a numeral equivalent to it. The bible uses number is patterns. Credibility of such patterns is still up and open for debate.

Your birth date has a lot to do with the term called ‘life lesson’. Your name when converted into numerals can tell you your state of consciousness that you will achieve in this life and also highlight the growth of your soul as well.

As discussed above, biblical numerology is associated with study of numbers in the bible. Such numerical symbols are very important aspect of interpreting the holy book. Also it is said; numbers play pivotal role in interpreting dreams.

Numerology and its biblical interpretation go hand in hand. That is why biblical numerology enjoys an important role in world of numbers.

As illustrated in bible, number 11 has all negatives attached to it. Biblical numerology describes number 11 representing imperfection, disorder, disintegration, dis-organization and chaos. Few examples can be cited as ;there were 11 dukes of Edom that were constantly at war with Israel, also 11 sons of Jacob bought disintegration to the family. Not to forget September 11 as one of the noteworthy examples to illustrate negatives associated with the number 11.

Number 11 in biblical sense portrays transgression, evil, peril, sin. Also it is looked upon as with dual character.

Many think that number 11 is to do with biblical prophecy. Others believe that it is the 11th hour i.e. time right before the holocaust and mass destruction. It is written in bible that in last day’s disorder and confusion would escalate and we can see the signs now. Example being havoc in Japan in 2011.Hence we can say that number 11 and biblical numerology go hand in hand.

Many firm believers of biblical numerology states that end of the world is about to come as many astronomers gave us the date of mass destruction i.e. 2012.Recent evidences push us to believe this. Tremors in New Zealand, followed by massive tsunami in Japan to list a few. If it is true what is scribbled in bible this is for sure end of days and make sure you do enough good deeds before facing the almighty on the judgment day. It can be said as 2nd coming of Christ or another Armageddon.

Number 11 also represents a dreamy nature, nervous energy, shyness coupled with impracticality. Number 11 has also to do with dual character. Often people with number 11 collapse beneath the weight of dual nature.11’s often provide the impetus to others but fails to receive admiration for their works. A person who is an 11 will often stumble between accomplishing everything and pressing on the self destruction button, such duality in nature make them prone to being addicted and have phobias as compared to other numbers. Such 11’s need to have faith and should avoid 24x7 analysis of the situations they get dropped in.

Biblical numerology – number 11 is going to serve as a foundation of a new repugnance movie from Lyn Bousman entitled 11 11 11.The movie is being crafted and is all set to hit your near by multiplexes on November 11,2011 (11/11/11)

Every word oscillates to a number and each and every number has it own secret meaning. Such codes when understood as they meant us to understand and interpreted correctly brings us step closer in getting connected with this mystic universe. There are vast number of staunch believers in piousness of biblical numerology, such belief makes us assured that biblical numerology shall not tarnish and it shall remain inter twigged in our day to day lives.