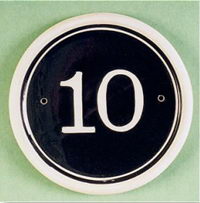 The biblical numerology behind number 10 revolves around 10 commandments that were delivered to Israelites after his exposure to Mount Sinai. Also this number is about 10 Plagues of Egypt and 10 nations. The gods associated with number 1 are the Atlas, the Greek God who bears the weight of world on his shoulders and God Uranus who is deeply concerned with technology and imagination. The biblical meaning of number 10 is completed course of time or completeness in divine order. Today this number is used only when referring to any kind of ranking or when describing anything that is near to perfection.

Number 10 is the symbol of matter in harmony. This number represents creator and the creation. Pythagoras said that number 10 is the symbol of universe and that it expressed the entire human knowledge. 5+5 gives number 10 which represents two opposite sides of conscience- involution and evolution. Zero in number 10 symbolizes a unit and number 1 completing it showing that this number contains all proceeding numbers as a whole contains its parts. The number 10 is considered as the most perfect of all numbers. This is because it contains the unit which makes it distinct and zero which depicts matter and chaos and is also related to created and non-created, power and force, life and nothing and the beginning and end.

The number 10 also represents the first couple in the way that 1 indicated the man and 0 is the egg fertilized by man i.e. 1. Therefore it gives a spiritual regression because marriage is the result of fall of man. Rightly said by Hugues of Saint Victor that this number also depicts the straightness in faith as it is the first number in extension, like hundred or a thousand. H.P. Blavatsky said, that the 1 and 0 in number ten represents column followed by a circle which means the principle of male and female. This symbol refers to Androgyne nature and Jehovah and being male and female simultaneously. Agrippa called the number 10, a number of all or universal and the full number marking the full journey of life. Number 10 represents revelation and divine law as well. Mayas explained the numerology of this number as the end of cycle and the beginning of another cycle. This number was taken as the number of life and death. This number is also known to have few superstitions with it. It is said that if a person washes his hair on the 10th day of his month, he is likely to get the promotion at work. Another superstition says that if you dream of number 10, you partner is unfaithful.

Bible explains the biblical meaning of number 10 as the Ten Commandments of God given to Moses and ten generations from Adam to Noah. Another holy event that is associated with number 10 is that the Holy Spirit descended on apostles after 10 days of Ascension of Jesus. It is also associated with ten leprous heal by Jesus Christ. Number 10 also drives its imprints from the ten pounds that were given to 10 servants in parable. The Bible also associates this number with ten impotent powers against the love of God. It is also said to be related to number 10 through ten vices that exclude the kingdom of God. Also there were ten witnesses supporting Boaz to marry Ruth. The ten according to Bible the plagues of Egypt which were sent by God by intermediary of Moses were the water transforming into blood, frogs, midges, big flies, plague on animals, epidemic of tumours and ulcers, hail and thunder, grasshoppers, three darkness days and lastly death of firstborns in each Egyptian family. Bible also associates number 10 with 10 nations whose hostility towards Israel was constant. It is also said that God move back the shadow of sundial of Ahaz by 10 degrees.

Number 10 is said to be the number of divine perfection: the ten commandments, 1/10 of your income is the tithe, 10 plagues on Egypt, 10 x 10 silver sockets which formed the foundation of Tabernacle and the 10 “I AM”s which Jesus Spoke in John. The ten I AM’s are I am the bread of life, I am the bread of life which came down from heaven, I am the living bread, I am the light of the world, I am one that bears witness of myself, I am the door of the sheep, I am the good shepherd, I am the resurrection and the life, I am the way, the truth and the life and the 10th one is I am the true vine.

Many theories based on use and importance of numbers exists. Most of the scholars and theorists believe biblical numerology holds good as it is based on the facts that cannot be denied. The holy Bible also intensifies its authenticity as it tells the relation of number 10 with past holy events.