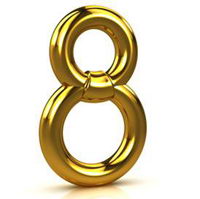 One such example is of Noah. When the whole earth was covered in floods, it was Noah the eighth person who stepped out and took the responsibility of starting a new era of life, to commence new order of things. The resurrection of Christ is also one fine example of this. The resurrection of Jesus is the ultimate new beginning. It is said in The Bible that Jesus rose on the first day of the next week from the day he was crucified. Thus again it was Eighth day which was chosen by God. The eighth day marked the beginning of new life form. Thus we can see that the number eight in the Bible signifies resurrection and new beginning. Not only this, there have been eight different resurrections in the Bible. Out of which three can be seen in the Old Testament, Three can be seen in the Gospels and the remaining two can be read in the Acts 9 and 40. There were eight miracles of Elijah as told in the bible. And God made eight covenants with Abraham.

The number 8 has been traditionally been associated with the entrance into the Covenant of God by the historic Christian Church, which has followed the bible blindly. This kind of understanding can come from God Himself who had commanded Circumcision - the Sign of the Covenant - to be performed on the Eighth Day. Thus once again, the number eight has exemplified the beginning of a new era in the bible. Following are the Lord’s covenants with Abraham: (were eight in number; seven before Isaac was offered up, and the eighth when he had been received "in a figure" from the dead).

Gen 21:12, Spiritual blessing headed up in the seed.

In the Bible there is a mention of a feast. The Feast of Tabenacles. This feast is said to have lasted for eight days. The number eight associated with this feast can show us that this feast was to celebrate a new beginning. The number 888 is the ultimate symbol of the lord himself as mentioned in the Bible. The resurrection of Jesus Christ on the eighth day along with the mention of eight people who were saved in the Noah’s Ark are a sign of the concept of revivification, restoration and a revival of a new era and order that is associated with the number eight. Apart from this, eight is used in the bible in other places also which don’t really have a link with a new beginning like the eight songs in the Old Testament, the Eight Miracles Of Elisha and the Seth lines of names, the sum of which is 3168, which again is a multiple of eight.