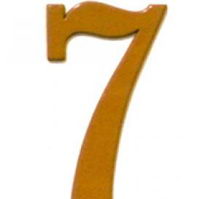 The number seven is one of the most significant numbers of the Bible because it is the number of spiritual perfection. It is the number which is stamped on every work of God. We can observe the importance of this number in nature too. Be it physics, chemistry or music we can see they are all based on this number of God’s work. All music that is created is based on seven basic notes of music, the eight note is just a higher or lower octave. If light is passed through a prism then it splits into seven parts, this is known by a very famous abbreviation VIBGYOR. There are seven basic crystal systems in minerals. Even in the periodic table we can observe that there are seven levels of periodicity. Therefore it is often said that the Holy Bible is the master textbook of all sciences be it physics,, chemistry or music.

Seven occurs 287 times in the scriptures 287= 7X41. The fraction seventh also occurs 98 times 98=7X14. The words seven-fold also occur 7 times. It is observed that all these numbers are multiples of seven but it is very remarkable to note that 287+98+7=392 and 392 is eight times square of 7. Seven is made up of two numbers four and three. Four being the perfect world number and three the number of divine perfection. The number seven is most sacred to the Hebrews. Therefore it represents a perfect world which is crowned by heaven. So seven denotes completeness through union of earth with heaven. There are seven churches, seven spirits, seven stars, seven seals, seven trumpets, seven dooms, seven new things, seven personages, etc.

On seventh day the creation was complete. Thus the number seven represents completeness. After the seventh day the world was complete and nothing could be added to it neither could something be taken away from it without marring it. So the world was perfect on the seventh day. The word finished is also connected with the number seven. The word created is used seven times in connection with God’s work. The high priest sprinkled blood on the mercy seat seven times on the Day of Atonement; this denotes completeness in the redemptive works of God. The candlestick in the Holy place of Tabernacle had seven branches and this denotes the completeness in the light of God for man’s soul. The blessings of the Lord are promised to His people seven times in the Book of Revelation. Life operates in a cycle of sevens. Every seven years changes occur in our body. There are seven bones in our face, neck, ankle and there are seven holes in our head. The mystery of God is completed in the seventh vial of the seventh trumpet of the seventh seal. There are seven parables of Mathews. There are seven mysteries. The seven eternal things in Hebrews.

Abraham’s blessing was a seven fold blessing. The psalms are stamped with the number seven in many ways. Thus the psalms are spiritually perfect. There are seven names mentioned of the authors of the psalms David, the sons of Korah, Asaph, Heman the Ezrahite, Ethan the Ezrahite, Moses and Solomon. Seven men of god are mentioned in the Old Testament. There are seven miracles in John’s Gospel. Seven appearances of the angel are mentioned; to the shepherds, to Joseph, to Joseph, after the temptation, In Gesthsemane, at the Resurrection, at the Ascension. There are seven gifts of Christ in John’s Gospel: His flesh, His life, His example, The comforter, My peace, His words, His glory. Gold is a symbol of God’s grace and glory. In the Bible seven words are used for Gold. Some words which occur seven times are a girdle, memorial, husbandman, to be angry, a decree, to restrain, to search, clean, corn, fat, covenant, captivity, a fleece, a garden, grass, to refine, living, little children, a Jew, to beget, I pray, to fast, a worm, satan, a maiden, beauty, these words occur in the Old Testament. In the New Testament the words which occur seven times are to purify, air, resurrection, deceit, to be absent, pieces of silver money, a star, incorruptible, to reign, servant, to know, master, commandment, to be chief, presence or coming, a kiss, a song, Zion. If these words are studied carefully then it will be observed that all these words are somehow related to perfection and completeness.

Therefore we see the number seven is a number of perfection and completeness. In every aspect of our lives we can see the significance of this number. It is therefore a number which is impressed upon every work of God. This number holds a very important and sacred place in the Word of God as inspired by the Holy Spirit. The number seven is a great number and is symbolic of spiritual perfection.