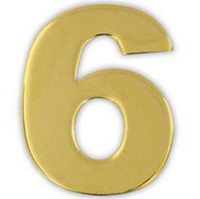 The number 6 is significant in the Bible because it is the number of Man, the number of imperfection in man’s work. It is a human number. It implies man’s existence sans God, sans Christ. The number 6 is concerned and related only to man. Six can be represented in various forms like 4+2, 4 represents man’s world and 2 shows man’s enmity with God or 5+1 where 5 represents God’s grace but 5+1 means that god’s grace is made futile with addition of perversion and corruption by man. 6 can also be written as 7-1 which means man is not able to attain spiritual perfection, i.e. he is falling short of attaining spiritual perfection. Thus, number 6 in the Bible is related to man and his imperfections or shortcomings. According to the Bible man was created on the sixth day so this number has been permanently impressed upon him. Also six days were given to man to do labor and to toil and work one day has been as rest, to connect with God. Number six is stamped upon everything that is related with man’s labor, be it measurements he works with or the time during which he works. For example the unit of measurement the foot is equal to 12 inches which is a multiple of 6 (12=2X6). The day consists of 24 hours (24=6X4), a day is divided into day and night each of 12 hours, an hour has 60 minutes (60=6X10), a minute again has 60 seconds. Also the serpent or the snake was created on the sixth day and the Sixth Commandments (among the Ten Commandments) talks about the worst sin i.e. murder.

Number six also has few other very significant occurrences like Jesus was charged with a devil six times. “He hath Beelzebub”, “Thou hast a Devil”, “Say we not well that...Thou hast a devil?", “Now we know that thou hast a Devil”, “He hath a Devil and is mad” and “He casteth out devils by Beelzebub”. Man’s opposition to God’s work was a six-fold opposition which is seen as the opposition to Nehemiah. The six folds consisted of six steps like Grief, Laughter, wrath indignation and mocking, fighting and open opposition, conference, false friends. There are six names for the serpent (Nachash, ak-shoov, ephah, tsiph-ohnee, Tanneen, Saraph) and there are six names for lion (Aree, Shachal, K’Pheer, Lah-yish, Lahvee, Shachatz). There are a few words which occur six times in the Bible like destruction, bar, shame, to change, ungodliness, entreat shamefully, abomination. A deep study of the scriptures will reveal the deeper meaning of all these words. A casual reader will overlook the fact that all these words have the same significance as the number six i.e. man’s imperfection and shortcomings.

The Great Pyramid has the number six impressed upon its measurements. Its unit was inch and its sexagesimal multiples. The first multiple is the foot (2X6), and then it rises at 18(3X6), 24(4X6) and so on. The Great pyramid’s base shows that the unit of measurement inch was derived from the division of the original circuit, 36,000 inches or 1000 yard. The number six not only signifies labor but also sorrow. There is no rest unless we have peace with God. Twelve which is the number of governmental perfection, when it is divided by two it becomes six, therefore number six denotes imperfection in the method of rule and the administration. For instance King Solomon’s throne had six steps and his kingdom soon fell apart i.e. it was divided. It was six times that the Lord was asked for a sign: The Pharisees; Mathew, the Sadducees; Mathew, the Disciples; Mathew, The People; Luke, The Jews; John, and The People; John. There were six people who bore the testimony to the Savior’s innocence: Pilate, Herod, Judas, Pilate’s wife, The dying thief, and The centurion.

Thus, the number 6 in the Bible is all about man and his labor. It signifies man’s shortcomings and the corruption he added into the world created by God. In whatever way we mathematically represent six it signifies corruption and imperfection only. It shows mans as one who is destitute of God. Since was created on the sixth day of creation so this number is permanently stamped on him and he will bear this number always. Number six not only denotes human labor but also human sorrow. Since God’s perfection is corrupted by human corruption so man is bound to suffer from sorrows. Six days have been given to man to work and perform labor and one day for rest and this we can observe in the modern era too. It is also true that the creation ended on the sixth day, i.e. God completed the creation of the world on the sixth day so it also represents secular completeness.