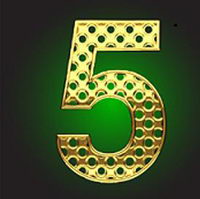 The number 5 in the Bible is significant because his creation, the ‘man’ has five fingers, five senses and five toes. Thus it is the number of God’s grace. There are five great mysteries: Father, Son, Spirit, Creation and Redemption. After the fall of man creation was cursed and it became subject to vanity. So man and creation needed to be redeemed therefore number 5 is the number of God’s grace. The number five may also speak of the inability of man and his weakness as only when ‘man’ is weak does he needs God’s Grace. As only if a man is incapable, he would require God’s Grace.

Number 4 signifies man’s weakness and helplessness and number 5 i.e. 4+1 shows divine strength added to man’s weakness and vanity which of course, means God’s grace. Gematria is the name given to the process of assigning numbers to different words. The gematria of the word Earth would be 296 which, in fact, is a multiple of 4 and the gematria of the word Heaven is 395, which is a multiple of 5. Therefore, Earth, which is the land of the man, is synonymous to his weakness and vanity and Heaven is synonymous of God’s grace. But what do you mean by grace? Grace means favor, an act of kindness and support and favor can be of many types. Favor that is done for the unworthy, favor that is done for someone who doesn’t deserve it, that favor is called grace. God called upon Abram and promised to make his name great. Was there any reason behind it? Did God do that for any purpose? No. He did it without any cause, without any particular reason. This was an instance of God’s grace towards his creation.

God changed Abram’s name to Abraham. This is very significant. Not because God chose Abram or because God endowed upon him his grace, but, the change was made by inserting in between his name the fifth letter of the alphabet h (Hey). Another instance of God’s grace can be seen when David went to fight with the enemy of Israel who was a giant named Goliath. David chose five smooth stones. These five stones were significant of David’s weakness supplemented by a divine power (the number of stones being 4+1). David used only one stone (one with divine power) and not the other four stones to defeat and conquer the mighty enemy.

But God’s Grace should not be confused with merit or warrant. The scriptures tell us again and again through various examples that the grace and merit cannot exist together. However one can’t attain salvation from merit. This is because if the salvation could be achieved through merit then, the there would not be any requirement for God’s Grace. The fifth book of Psalms exemplifies the same great fact. The first Psalm (Psalm 107) magnifies this, and explains to us, how "He sent His word and healed them" (verse 20), and again and again delivered his men out of all their trouble. The importance of number 5 is further exemplified by the Fifth Psalm of the First Book. It has a special reference to the God’ Grace and tells us that God encompasses us all in his grace. The Fifth Book of the Bible (Deuteronomy) magnifies the grace of God, and in it special pains, so to speak, are taken to emphasis the great fact that not for the sake of the people, but for God's own Name's sake had He called, and chosen, and blessed them. In the Bible, there is also a reference to The Stone Kingdom. This kingdom would be the FIFTH kingdom after the world powers when all of the earth’s dominions would be combined to one single kingdom and then the almighty would take over them to rule over the along with his appointed one with glory and with grace. There are also certain phrases which repeat five times in the bible and they speak of God’s Grace "Bless the Lord, O my soul." - All in Psalms 103 and 104, viz., 103:1, 2, 23 and 104:1, 35. The Talmud calls attention to this and says, "As God fills the earth and nourishes it, so He nourishes and blesses the soul."

The various examples stated above tell us a great deal about the significance of the number five in the biblical literature. It tells us through the Gematria that the importance of this number is huge as it signifies the grace of God. Also through the various examples of David, The Fifth Book of Psalms, The fifth kingdom etc that how again and again God has showed Grace to his creation. The number five is the symbol of God’s grace. Grace should never be confused with merit, because merit is only for the worthy. But unlike merit, grace is for everyone without any prejudice and preconception.