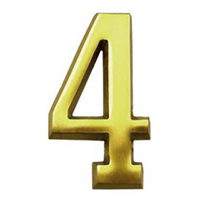 Ancient Hebrews considered this number very important and significant. This is due to the name of their God's name Yahweh is spelt with 4 letters in Aramaic. Number 4 itself and its equivalent geometrical shape (the circle) were sacred due to ancient beliefs that the world was flat.

Ancient pagans referred to four as the number, representing the four world directions – North, East, South, and West, as well as the four elements – fire, earth, wind, and air.

Some fatherly Gods such as Jupiter, Odin, and Zeus - Roman, Norse, and Greek father Gods respectively.

Colors of number 4 are emerald and green.

Gemstones, associated with this number (4) are emerald and jade.

Plants of this number: bamboo, ivy, and baby's breath.

Several superstitions about four:
Most of us know that a four-leaf clover brings good luck to whoever finds it.
If you have found four cookies fused together while baking – there will be a wedding soon.
Four ravens, sitting on the same branch also mean wedding.
If you find 4 colors in a single pansy petal bodes wealth, health, prosperity, and happiness.
House, which has number 4 in the address, is inauspicious.
If you keep four aces of a regular playing deck is believed to bring power, wealth, love, and popularity (ace of spades, diamonds, hearts, and clubs respectively).
Or on the contrary, if you keep all four aces in the game – you will lose.
Do not wash your hair on the 4th day of the month, or you will early go gray.
June 4th and October 4th are not the lucky days for marriage.
If you have seen number 4 in your dreams – soon you will be presented a very lucky opportunity.