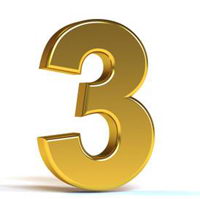 This number is considered holy by Christians and interpreted as The Father, The Son and The Holy Ghost. The famous psychologist Carl Jung was interpreting it as the merge of soul, will, and heart of a person. The ancient Celts and Babylonians believed this number to represent creation.

Gods associated with this number (3) are: the Greek father of Time and Earth - Cronos, Queen of Witches – Hecate, Roman God if Death – Pluto, Saturn – the God of Limitation in Roman mythology, and the Norse God if War – Tyr.

Colors associated with number 3 are lemon, yellow, cream, and beige.

Flowers are or yellow color: orchids and roses.

Gemstone of number 3 is topaz.

Superstitions about number 3 are the following:
Unlucky events usually happen in the series of three.
Three butterflies sitting of one leaf are a symbol of bad luck.
If you want to shoo away the devil you just have to spit three times.
Lighting three cigarettes from the same match is very unlucky.
Owl, hooting three times, brings misfortune.
A visitor will come to your place if you see a cat washing his ears 3 times.
Dog with a three legs brings luck.
Try anything you want at the tried time and it will be successful.
Washing hair on the 3rd day of any month may bring you wealth.
May 3rd is a very unlucky day to get married.
If you have seen a dream about number three, you may loose your lover.