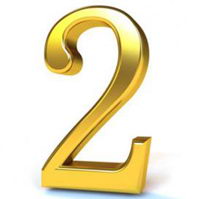 This number in Tarot cards represents the so-called dance of courtship or love between two people. Chinese people believe that number 2 represents two forces of Ying and Yang, constructive, receptive female energy and expansive creative energy of a male respectively.
But Early Christians did not like this number, they believed that it represented the division between human soul and God or even associated number 2 with Devil. And Zoroastrians believe that 2 is a symbol of equal struggle between the good and evil forces, which lasts eternally.
Gods, associated with this number are: Greek Goddes of Grain – Ceres, Loki – the North God of Fertility, Frigga the Goddess of Norse Hearth, and famous Venus – Goddess of Love in Greek mythology.

Common colors of number 2 are: gold, orange, peach, and tangerine.

Gemstones, which are associated with number 2: coral and gold (metal actually).

Common superstitions about this number (2) are:
If you saw two crows flying over your house it means there will be a wedding in your family.
If there is a situation, when 2 people sneeze at the same time both – then each of them will get a good luck.
Two shoots growing from the root of a single cabbage bring good luck.
Two holes in one sock are considered lucky.
If you accidentally break two eggs at the same time – it tells that you'll soon find your ideal soul mate.
Washing head on the second day of a month brings good fortune.
September 2nd and January 2nd are not considered a lucky days for marriage.
But egg with two yolks means that soon there will be a death in your family.
If you have seen number 2 in your dreams then someone is jealous of you.