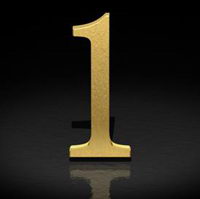 The number one is of great significance, be it in any language it always stands for unity. It can said to be having two aspects, one as a cardinal number where it represents unity and other as an ordinal number where it denotes primacy. Since number one is indivisible and is not made up of other numbers, this shows its self sufficiency. It is also the source of all other numbers. The same is with the God; God is self sufficient, independent and is the source of all. All need Him and He does not need anybody. One does not either stay in harmony with any other number neither is in conflict with any, hence this number excludes all differences that exist.

In the Bible it is written “Hear, O Israel, the Lord thy God, is ONE Lord”. Thus number one is the number of the God and the Bible denies the existence of another God. So number one is God’s number. The first commandment among the Ten Commandments says “Thou shalt have no other Gods”. So in every occurrence number one represents One God and says another God cannot exist. The number one is always the beginning and thus marks the commencement of all. So we should always begin with the God. Anything that does not start with the God does not give good results. The song of the angels began with the Glory of God and then they sang of the good deeds towards man. This meant that God cannot be glorified without doing good deed to man. The first book of the Bible is called the “seed plot of the Bible” and it contains all other books in itself. The title of the book is Divine “the beginning”. Thus it also says that God is first. According to the one Millenial rule, it says that if more than one will exist then there will be no peace only conflicts and disharmony. This is the reason of unrest and conflicts everywhere be it families, parties or nations. The number one occurs 1898 times in the Bible.

God made Eve from only one rib and stamped the number on it. God took a part of Adam from near his heart so that both of them would love each other and a part from his side so that they would embrace each other forever. God was preaching unity to all by doing this. The first ministerial words of Jesus are also very significant. When he fasted for forty days not a single word uttered by him is recorded in the scriptures. The first words that are recorded are “it is written”. By this Jesus was trying to teach us the lesson that God is the beginning and the end of all ministry. It is only the first commandment and not any other that talks about One God. Therefore it is seen that with every occurrence of the number one the fact that is revealed is the self sufficiency and independence of God. A few other significant occurrences of the number one are “The First Day”, “The name of the first in Pison”, “He took one of his ribs” and “They two shall be one flesh”. The modern methods of man are all wrong because they begin with man and are pivoted around man. The Divine method is to begin with God. So man has to suffer failure everywhere and so there is unrest everywhere.

The first occurrence of the word Hallelujah every where be it the Old Testament or the New Testament it signifies judgment and so is significant of God. The first occurrence of the word Prophet is related to Abraham. So we understand that Prophet is not only one who foretells but he is one who can witness God. The word Holy occurs first time in the Book of Redemption when God comes to redeem His people in . The Day of the Lord where it occurs first speaks of the Day when Lord will arise and shake the earth and man will feel humble and low that day. The first question of the Old and the New Testament are very significant. “Where art thou?” Lord asked this question to the sinner when he was hiding and escaping Lord’s Holy presence.

Thus we see that number one denotes unity and independence and self sufficiency. Every where with its occurrence the number one points out to the lesson that God is one and it completely denies the existence of any other God. The number one always marks and represents the beginning and thus the scriptures teach us to begin with the God. But in the modern times man is doing a mistake, he is beginning with himself and is occupied with himself so there is disharmony and conflicts every where.